Let's see if you can situate this chapter with what we have covered so far.

Just like vElim and proof by cases, the formal proof rule ~Intro is paired with an informal proof method that mirrors it exactly. The informal method is so common and important it has been called many things: proof by contradiction, reductio ad absurdum, or just reductio for short.

~Intro and Reductio: how to reason to a negation (formally and informally)

In this section our focus is how to use the informal method in English.

If you've ever done a difficult Sudoku puzzle, the idea will be familiar. Sometimes you know a spot must be one of two numbers, but it's not clear which one. All you can do it temporarily assume it is one of the numbers and see whether or not you get a contradiction.

For example, we want you to figure out what number goes where the red "a" is in the puzzle below. It's clear that a, b, c, d and e are all linked: they all have to be 1 or 9.

Let's do this: let's see whether it is possible for a = 1. So temporarily assume that a = 1, and see what you figure out. 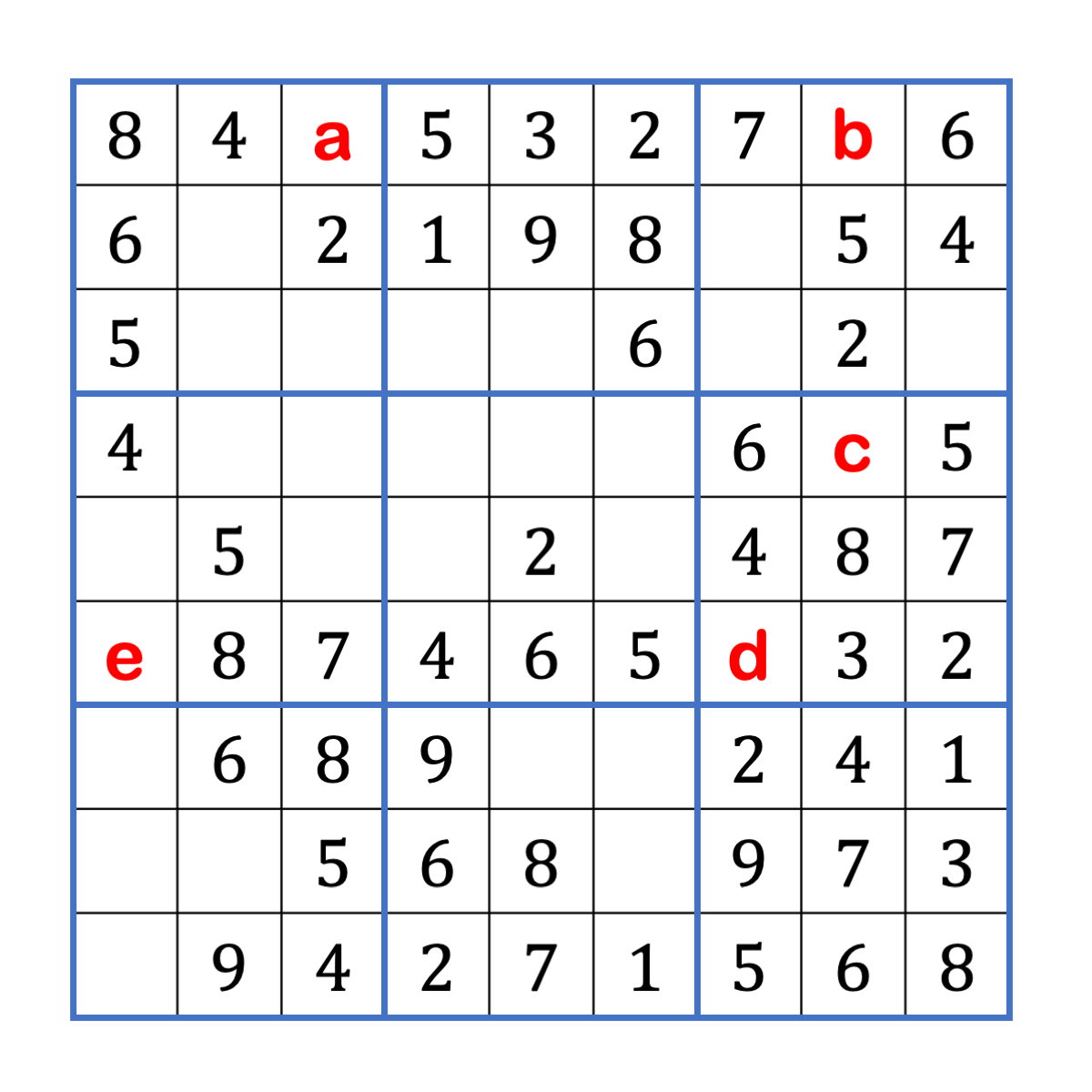 The key step for our purposes is when we were able to infer that a ≠ 1. Making that inference is the essence of reductio.

If we make a temporary assumption and can show that a contradiction results, then we know the negation of the assumption is true. If we assume a = 1 and reach a contradiction, we know that a = 1 is impossible. That means the negation of a = 1 is true. a ≠ 1 is just shorthand for it's not the case that a = 1. If you understand that, you understand reductio.

"Reductio" is short for reductio ad absurdum, which is Latin for "reduce to an absurdity or contradiction." The same idea is expressed in the name "proof by contradiction." What we are doing is reducing the temporary assumption (a = 1) to a contradiction, which shows that a ≠ 1.

Here's another way of making the same point. Let's say someone doesn't understand that a can't be 1. We want to prove to them a ≠ 1. Here's how we do it.

This is a model for how to construct all of your reductio proofs. Here are some steps to follow:

Step 1: Start with "proof by contradiction" or "proof by reductio".

Step 2: Write "assume for reductio ..., and we want to show a contradiction results", where you put the opposite of what you want to show in the ellipsis.

Step 3: Show how a contradiction results from the temporary assumption. (Of course, you still get to use any other assumptions and information in the argument.)

Step 4: Write "hence we know ... by reductio. Done.", where you put your conclusion in for the ellipsis.

Now you get to try. Here's an argument.

We've given you very explicit directions, because sometimes students have a hard time knowing what constitutes a good informal proof. The beauty of formal proofs is that the rules are explicit, but since informal proofs are audience dependent, it can be hard to know what is clear enough.

Once you get more experience with reductio proofs, and you know enough about your audience, you can be less heavy-handed than our guidelines require. For now, though, you know how to make the proof extremely clear for your audience.

So far the examples of reductio proofs concern arguments with negative conclusions. The Sudoku argument proved a ≠ 1, and you just proved Pia is not guilty.

Reductio is a general proof method: it can prove negative and positive conclusions.

But reductio isn't restricted to proving negations. It is a completely general proof method: it can prove negative and positive conclusions.

For example, consider this argument:

This conclusion isn't a negation, but you can still prove it with reductio.

We said that reductio proofs aren't always as explicit as our guidelines recommend. Here's an example of a faster proof by contradiction:

Once you get more experience, and your audience is familiar with the method, then your reductio proofs can start to look like that.