Soundness and completeness are important metalogic topics, but they are just a small part of the whole area of knowledge.

Terminology warning:"truth functional completeness" is not the same thing as "completeness" that we have been talking about. We use these terms because they are well entrenched in the field, but we know that makes it confusing.

TFC concerns the expressive power of a system: a system can say or express anything that it is designed to say. (Completeness that we discussed in Section 19.1, by contrast, concerns how powerful the proof system is.)

Take BOOL, for example. BOOL is supposed to capture the logic of conjunction, disjunction, and negation, which are truth-functional operators. Since BOOL's intended application is truth-functional logic, it would be unfortunate it there were some truth functions BOOL couldn't express.

What we'll see, though, is that BOOL in fact is truth functionally complete.

That means there are an infinite number of possible truth functions, consisting of more and more rows.

Instead, we need a different plan. The important thing to notice is that, even though there are an infinite number of possible truth functions, each one has a fixed, finite number of rows.

All sentences of BOOL are finitely long.

The way we've created BOOL, it cannot have infinitely long sentences. There is no sentence like P&Q&R&S&..., going on forever.

There are various reasons why infinitely long sentences would cause problems for our logical system. For example, imagine a sentence with an infinite number of negations: ~~~~...P. If P is true, is that sentence true or false? It doesn't really work to say it is either, which means our connectives are no longer truth functional; or we have to sacrifice bivalence.

Classical logics: logical systems created with certain standard properties, like bivalence and finitely long sentences, that make them powerful but easy to learn and use.

Like many of the decisions we make, though, in building our logical system, from an abstract point of view, nothing says it is impossible to have a system with infinitely long sentences. Just like it's possible to get rid of bivalence, and have systems with other truth values. But making those changes causes other major changes, which is why we are sticking with simple, or what is called "classical", assumptions for the systems in this textbook. In an advanced logic class you can study "nonclassical" logics.

Back to our plan: prove that BOOL can express any possible truth function.

Algorithm: a fancy word for a step-by-step procedure.

Since each truth function is finitely long, we can define a step-by-step procedure for creating a sentence of BOOL that expresses it.

If we do that, we'll have shown that BOOL is truth functionally complete, because, for any possible truth function, we know there's a sentence of BOOL that expresses it.

We'll call it the TFC algorithm. Algorithm is just a fancy word for a step-by-step procedure, a recipe for expressing any possible truth function in BOOL. Once you understand the algorithm, you will see that there is indeed no truth function BOOL cannot express.

For example, consider a random 8-rowed truth function like this. 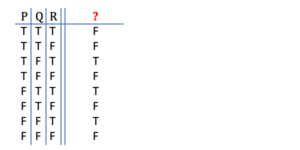 The goal is to create a sentence of BOOL, so that, if we put it where the ? is and compute its truth function, it would be the exact one in the picture above.

In our example, there are three Ts to circle: 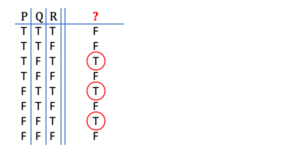 For each of the Ts in our example, we create the conjunction: 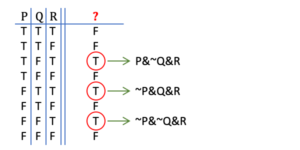 Step 3: Disjoin all those conjunctions.

If we add disjunctions between each of these sentences: 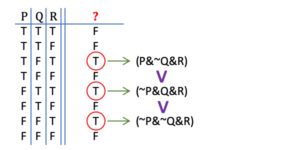 Think about computing its truth function. It has three disjuncts, and each disjunct is a conjunction. Each of those conjunctions is only going to be true in one way: on the specific row of the truth table it was designed for. For example, P&~Q&R is true just in case P is true and Q is false and R is true, which is row 3 of the truth table.

So the disjunction of those will be true on those three rows, which is exactly what we wanted.

We have proven that BOOL is TFC.

So the TFC algorithm works. Given any random truth function, it will generate a sentence of BOOL that expresses it, which means that BOOL is truth functionally complete.

Now it's your turn to practice.